It’s not what’s happening to you now or what has happened in your past that determines who you become. Rather, it’s your decisions about what to focus on, what things mean to you, and what you’re going to do about them that will determine your ultimate destiny.

In this week’s episode, we’re going to talk cover 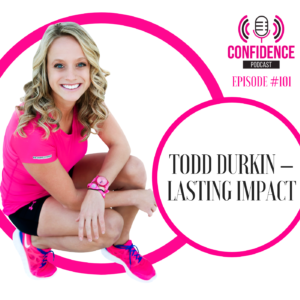 Todd Durkin, is an internationally recognized performance-enhancement coach, personal trainer, massage therapist, author, and speaker who motivates, educates and inspires people worldwide.  He is the founder and creator of Fitness Quest 10 & Todd Durkin Enterprises in San Diego, CA, where his wonderful team focuses on personal training, massage therapy, Pilates, yoga, sports performance training, nutrition, physical therapy, and chiropractic to help transform the bodies, minds and spirits of a broad clientele.  He is a 2 Time Personal Trainer of the Year (IDEA & ACE) and has received numerous industry accolades.

Additionally, Todd is the Head of the Under Armour Performance Training Council, where he helps drive new methodologies and training techniques to help Under Armour develop the highest quality programs and apparel for performance training.  He has appeared on national television commercials with Under Armour, is a major part of the “Combine 360” program, and speaks at regular events such as the NFL Combine, Super Bowl, and Pro Bowl on their behalf.

Men’s Health recently named his gym, Fitness Quest 10, one of the Top 10 Gyms in the US.  Todd has appeared on 60 Minutes, ESPN, the NFL Network and has been featured in Sports Illustrated, USA Today, STACK Magazine, Business Week, Prevention, ESPN the Magazine, Men’s Health, and countless other media outlets.  Todd has authored 35 DVDs on strength and conditioning, functional fitness, massage/bodywork and business/personal growth.

Todd and his staff provide motivational and educational programs and team-building events to companies and conferences worldwide.

He and his wife Melanie reside in San Diego, CA, with their three children, Luke, Brady, and McKenna.

Are you truly living?

Impact is all about purpose.

LISTENER OF THE EPISODE: Alana Copet

I am writing tonight to let you know I’d like to be listener of the episode. I never miss an episode, I’ve been with you since day one and love hearing your words of inspiration, encouragement, and your real life struggles.

Sincerely and with much love,

Accountability coaching is for

Be more of who you are. Be you. Be free.

IF YOU WANT TO BE FEATURED AS LISTENER OF THE EPISODE ALL YOU HAVE TO DO IS SHARE YOUR STORY WITH ME!